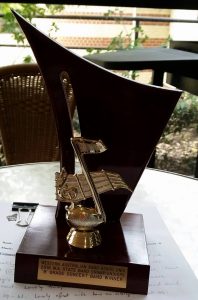 Leeming Area Community Bands (LACB) began in 1996 with two bands.  One was a band for youths who were learning music at school and the other was a band for adults who were either interested in learning to play music for the first time or interested in playing a new musical instrument.  The adult band initially had about 16 members and began with the most basic band music.  The band culture is considered as important as the music and the members engaged in social events, fund raising and various other group activities.

The bands were the creation of Phil Arnold, a local primary school music teacher.  He managed to attract a few experienced musicians to join the band as informal tutors and to provide encouragement to the new players. The youth band was disbanded at the end of 2001 as increasing opportunities for band work occurred within the school curriculum.  However, the adult band continued to evolve and gain both members and expertise.  With increased musicality and membership numbers; new ensembles have formed over the years.  The LACB organisation now consists of the Leeming Concert Band, the Leeming Big Band, the Leeming Intermediate Band, the Leeming Training Band and various ensembles.

The LACB now has over 80 active members ranging in ages from 18 to 90 and enters Concert Bandsand ensembles in the State Band Competitions.

We normally encourage prospective members to come along and play in several rehearsals before deciding whether they want to join a band.  If the player wishes to join all that is required is to fill in a simple membership application.  We do not have auditions but it is generally desirable for new players to be at about the level of AMEB Grade 4+ to easily cope with the level of music being played by the Concert Band.  Members of the Intermediate Band need to play at about AMEB Grade 2.  The Musical Director can have the final say in accepting applications but this is only likely to be required in an extreme case of mismatch between band needs and player skills or instrument selection.

LACB’s statement of purpose is: to provide opportunities for musicians to join together to perform varied, interesting and fun music for both personal and public enjoyment whilst fostering the development of musicianship in a positive and supportive environment.

The words enjoyment and supportive are critical here.  LACB seeks to enrich members lives not dominate them.  Our origins were in a cohesive social group and we have tried to remain that as we have progressed.  We know people will need to miss rehearsals at times and other things in their life may push music into the background occasionally.  However, this is not considered a problem because the cohesion in the group ensures both tolerance by the group and also responsibility to the group.